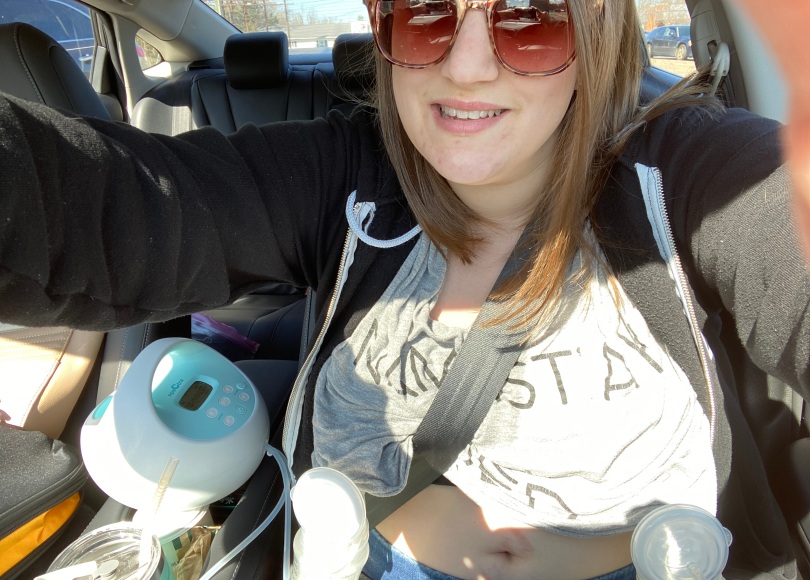 Read all about our family’s journey with breastfeeding and how I chose to “exclusively pump” for Willa’s first year.

First, I want to start off by saying:

You should feed your baby the way that suits YOU, YOUR BABY, and YOUR FAMILY and have absolutely no shame in whatever way you choose to do so. None.

How we arrived at exclusively pumping

On August 15, 2019, Wilhelmina Adelaide joined our family. You can read the whole story here if you want, but the gist of it is that I developed pre-eclampsia and had a cesarean 3.5 weeks before our due date. Due to this, Willa spent a few hours in the NICU after delivery for her rapid breathing. While in the NICU she was fed screened donor milk because her blood sugar was getting lower. Upon discharge from the NICU, she joined us in our room and we were able to have our skin to skin time and first nursing moments. It seemed so promising! She knew what to do and although she kept falling back asleep, she seemed to be getting something?

For the first few days (while still at the hospital) we continued to nurse then top off with screened donor milk. Then after a few days a Lactation Consultant at the hospital stopped by and got me setup with their hospital grade pump to help my supply as Willa wasn’t taking much in herself. The results of my first pumping session are above, I was so excited to see the little bit of colostrum!

This is when we started “triple feeding”. If you’ve ever done this you will agree with me that it can be summarized in one word: HELL. To elaborate, “triple feeding” means putting the baby to breast(s) to nurse, then feeding baby from a bottle (either formula or pumped milk), then pumping for 20-30 minutes. If you know literally anything about a newborn, you’ll know that basically by time we were done with this whole process she would be awake again and ready for the next feed.

This continued for a few weeks as my supply came in. See, my supply arrived at a bit of a delay likely due to the early delivery, having a cesarean, and not starting to pump until 2 days after the birth. I even consulted with an in-home Lactation Consultant but her only advice was to take supplements (such as fenugreek which I now know can actually lower supply, yikes!), keep putting baby to breast, and to bedshare – something I was not willing to do for the sake of breastfeeding. Willa just never had that great of a latch, she never stayed awake long enough, and she never had the energy to nurse effectively.

After attempting to nurse a whopping 52 times, I made a call – we were done triple feeding. I knew that I didn’t want to continue over and over and over again to try and nurse with the same results. Sure, maybe one day she would catch on but it just wasn’t worth it to me. I would just pump for however long I could, then we would feed formula after that.

Little did I know that there was a term for this – Exclusively Pumping. It’s something many people choose to do, who knew? They don’t tell you these things in the “breastfeeding” classes at the hospital or when you order your pump. Usually pumping is considered something you do when you’re away from your baby such as when you’re at work or traveling. But for me it became my way to feed my child.

I never formally set a goal for how long I would pump, I just took it a day at a time and quickly we fell into a system where I would pump while Anthony would feed her. I joined a few groups online such as this great evidence-based Facebook group. They were so supportive and guided me when I needed it!

Feeding fresh and the “Pitcher method”

For about 11 months, we fed most of her bottles fresh. For example, I would pump at 4pm and leave the bottle sitting out for her next feed at 8pm. Breast milk can sit out for 4 hours without needing to be refrigerated, according to the CDC. This worked great for us because it meant no bagging breast milk and no cooling/freezing then warming/thawing. I built up a modest “freezer stash” of about a week’s worth of milk but other than that we would offer her what I pumped and whatever was left over was dumped.

About 6 months in we replaced the freezer stash since breast milk in a regular freezer only stays good for about that amount of time, again according to the CDC. Then when Willa started daycare in July we decided to use some of our freezer stash so that we could get ahead enough for her first day at school.

Well, according to Willa frozen breast milk is absolutely disgusting. So our freezer stash was suddenly completely useless. We immediately switched to the “pitcher method” and were able to get ahead a day thankfully in time to start daycare.

If you’re not aware of it: The pitcher method is where you pump, place the milk into a bottle, and put that bottle in the fridge to cool. Once that milk is cooled to fridge temp, you pour it into a pitcher with today’s date on it. You then continue that process through out the day and start a new pitcher in the morning for the next day. Each day, you pour bottles from the previous day’s pitcher, then whatever is left over you dispose of (or if you are building your freezer stash and have a baby that will drink frozen milk you can freeze that).

There are two important notes with the pitcher method:

The benefits of exclusively pumping

There are two great benefits I found with exclusively pumping:

Weaning off the pump

On August 29th, after just over a year of pumping/breast feeding, I pumped for the 2,000th time and fed that bottle fresh to Willa just before bedtime. It was her very last bottle of expressed breast milk and one of my last times pumping.

That was my first day pumping only 2 times per day (for the two weeks prior I had been pumping 3 times a day). I spent only 3 days pumping twice a day, which I now realize was a mistake. After that I pumped once a day for about a week and a half. After retiring my double electric pump on September 9th, I used a manual pump twice just to help ease the discomfort a bit. In hindsight I could have done without the manual pump and just used the double electric pump on very low settings, but oh well!

Once I was done with all of my pumps, their accessories, and the bottles I started to purge! First, I snapped photos of Willa with all of the nipples that she preferred to mine:

I captured this photo of all the pumping equipment and supplies that I would no longer need (I tossed a few things before snapping this pic, whoops):

Anthony’s reaction to seeing everything laid out was “whoa” but honestly I think we kept things pretty modest! Sure, some things we didn’t end up using but for the most part we got great use out of everything you see pictured here.

If you’re a data junkie like we are, you’ll love this. We utilized the app Baby Daybook for all things Willa for her first year of life – diaper changes, sleep, feedings, medicine, and of course each time I pumped including the output. I find the stats so interesting to look at, so I figured why not share for those that may also be curious!

And some charts to visualize things, of course:

There aren’t a whole lot of things I’d go back and do differently, but there are a few!

All in all, I look back on the last year and feel like we made a great choice for our family. I don’t feel the urge to take a sledgehammer to my pumps, so I figure that’s a good place to be in. If you’re reading this and embarking on your own pumping journey, I wish you well! If you have any questions on pumping, I’m no Lactation Consultant, but I can probably point you in the right direction so please reach out.

To round things out, here are some photos related to pumping that I took over the last year, just some fun ones to remember the times by.