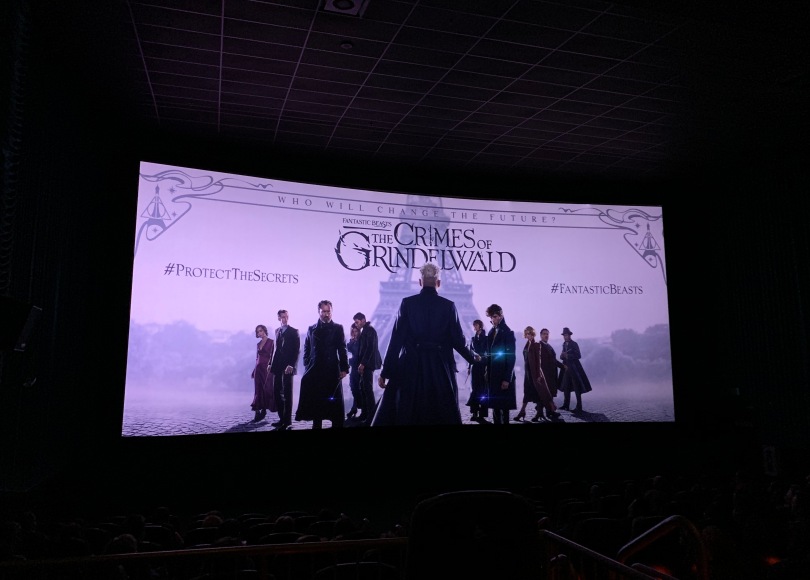 Tonight we got to see an advance screening of Fantastic Beasts: The Crimes of Grindelwald. Unlike most of the advance screenings we get invited to, this one we paid our own tickets for and it was available at many theatres across the US… so I consider this more of a “soft launch” than an advance screening but I digress. We arrived around 6:00pm at Regal Short Pump Stadium 14 & IMAX (our normal theatre for advance screenings) to an empty lobby. Turns out I had put in our shared calendar that the movie started at 6:30 but the correct start time was 7:00. So, we were a bit early but that’s perfectly fine! With all of our free time prior to the movie, we managed to find great seats (you know the kind with the bar in front of them so you can put your feet up). Once we were settled in we pulled out our Nintendo Switch and had some fun playing games. Several years ago I purchased this owl ring and earring set, and I have to say it’s come in handy for several Harry Potter universe events! Anyway, back to the main event: After watching the Noovie Pre Show and playing some Noovie ARcade games, it was time for the main event.

I’ll try not give away any spoilers, but basically don’t read this if you haven’t at least seen the trailers. Also, the next few paragraphs aren’t necessarily in “order”.

As soon as this image (above) appeared on the screen, a woman in one of the front rows immediately started clapping. I appreciate her enthusiasm, but it’s a movie and not live theatre. Thankfully she only tried to get an applause going for a few seconds and quickly gave up. The movie started off with quite a bit of action. Honestly, some of the action at this point moved a bit too fast for me to really grasp what was going on. But the action itself of course wasn’t too important, just the outcome. Above is a photo of a salamander (a newt to be specific, haha). Please make note of his/her eyes, this will make more sense when you see the movie. At the point in the movie where this photo makes sense, our theatre was full-on laughing. Of course, applause was attempted in our theatre when Hogwarts was shown on screen. It was really neat to see Hogwarts in a different era, though it seems like Hogwarts has been remained untouched for several decades at least. Even down to the lessons! I won’t spoil it entirely, but a memorable lesson from Harry Potter and the Prisoner of Azkaban is also shown in this movie. The music accompanying the Hogwarts portions of the movie were fantastic of course, not that the rest of the movie didn’t have great music because it did. By the way, you can purchase the soundtrack online already. Anthony’s sole complaint from the movie is that he didn’t feel the “beasts” were as integral to the plot and action as in the previous movie. I disagree, as I felt the animals were pretty steadily involved throughout the movie. However, I do agree that the primary focus of the movie was Grindelwald, as the title suggests. Also I’m pretty focused on animals in general so maybe I’m giving them more credit than they deserve. I have to say the second Fantastic Beasts wasn’t quite as enchanting as the first, but it was still very nice to be drawn into the world of Harry Potter once more, so no complaints from me. I’m still working my way through the books, still on book 4 – Harry Potter and the Goblet of Fire. The movie ended with a very clear path for apparent sequels. I figure we’ll see one in 2020 since it’s been 2 years since the first Fantastic Beasts, but time will tell. Have you seen Fantastic Beasts: The Crimes of Grindelwald? Let us know your thoughts in the comments!