I’ve finally decided to start DNA testing all of my dogs just to satisfy my own curiosity. Because I refuse to drop a ton of cash on this little hobby, I’ve been keeping an eye out for sales online. A few weeks ago Amazon had the Wisdom Panel 3.0 on sale for $50.99 so I purchased one right away. I’ve heard some positive things about this test and wanted to give it a try.

A few days later the test arrived, and a few days after that I swabbed Theodore’s cheek and off the test went! You may recall that Theodore is our ~ 8 year old rescue dog (from Adopt-A-Pet of Victoria) that weighs about 40 lbs and has a permanently broken jaw. Since Theodore was the only dog we didn’t really have any solid guesses on, we decided to DNA test him first (with all of our other dogs we have guesses we’re pretty confident in). For a complete origin story on him, check out this post I published a few years back.

Theodore as a baby

Check out his cute nose 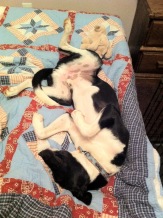 He has spots on his belly

He also has spots on his toes!

He drools, but that’s due to his broken jaw.

We’ve just received the results back and Anthony and I have already reviewed the results. But before we share… how about you make a few guesses? We’ll publish another post tomorrow with a break-down of the breed(s) and what we can see in him based on the results.

PS: With this poll you can add your own guesses and others can vote on them too, so don’t feel limited by these few options I have… those were just my own guesses prior to the DNA testing. You can also select multiple options if you have a few breed guesses since he’s obviously a mix.

One response to “What’s a “Theodore”?”