Earlier this week, we headed over to Studio Movie Grill in Plano (our favorite place to catch movies) and feasted on the new and improved Power Rangers… aka my childhood come back to life.

Warning: I don’t claim to have spoiler-free posts, so if you are super duper opposed to spoilers come back after you’ve seen the movie. That said, I try not to spoil anything that important if I can help it.

Our generation really loves a good remake or reboot, and I believe this one delivered. If you ever check out old “Mighty Morphin Power Rangers” episodes, you’ll quickly realize that they don’t hold up very well . It’s nothing against the 90s, but many of the shows were super corny, dramatic, and over the top. In 1999, the series ended and although there were other iterations, they were never quite the same.

That’s why I was pleased to see that the 2017 adaptation knock it out of the park. There were brief moments throughout the film that brought a glimmer of the nostalgia back, but it was always done in an authentic but yet fresh way.

Something great that’s come out of these remakes/reboots has been the introduction of more diverse characters. Many of our “classics” are being remade with an emphasis on diversity of race, gender (aka the all-female cast of Ghostbusters which I thought was fantastic), and even disabilities.

April 2nd was World Autism Awareness Day, and the Power Rangers’ movie debut arrived just in time. In case you hadn’t heard yet, the Blue ranger is “on the spectrum” as he tells the Red ranger. RJ Cyler plays Blue and I think he did a great job 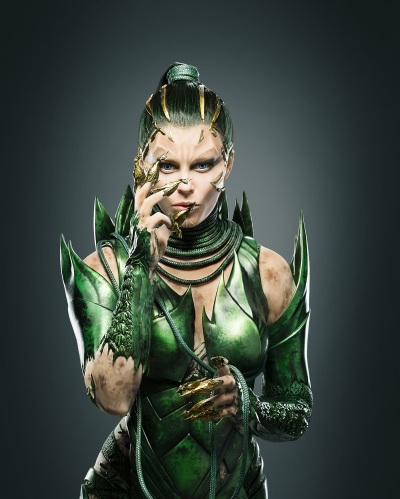 Also, I need to shine some light on this woman right here, Elizabeth Banks deserves a standing ovation for her work in this movie! In this film, her character underwent such an amazing transformation and the entire time she was delightfully cunning and stole the show for me.

She played a character that I had never seen in her before on any of her other films or shows. So kudos to her for pulling off such a challenging character in a spectacular way. I’m almost sad that when the next movie arrives she will not be in it, but I’m hopeful that the new Green Ranger will be a powerful character as well.

This movie brought back something I absolutely loved about the TV series – in every seen the rangers each are wearing a piece of clothing that matches their coin’s color. I have to say, searching each scene for the token colors made me feel like a giddy 7-year-old again and the music flash-backs really did it for me as well.

All-in-all I’d give it a solid 4 stars and I recommend seeing it while in theaters… although it will still be awesome to see the Power Rangers on the little screen again once released!

All photos used in this post are courtesy of powerrangers.movie. Check it out for more stills of the movie and more.