As we do with every Nintendo system, we camped out for the Nintendo Switch. Of course, Anthony had pre-ordered the console back in January (on day one) so waiting outside starting at about 11pm wasn’t exactly “roughing it”…especially with our beach blanket, Geek Squad blanket, Automattic blanket, a tumbler full of Cinnamon Dolce Latte, an iPad, my work MacBook Pro, and various other tech. 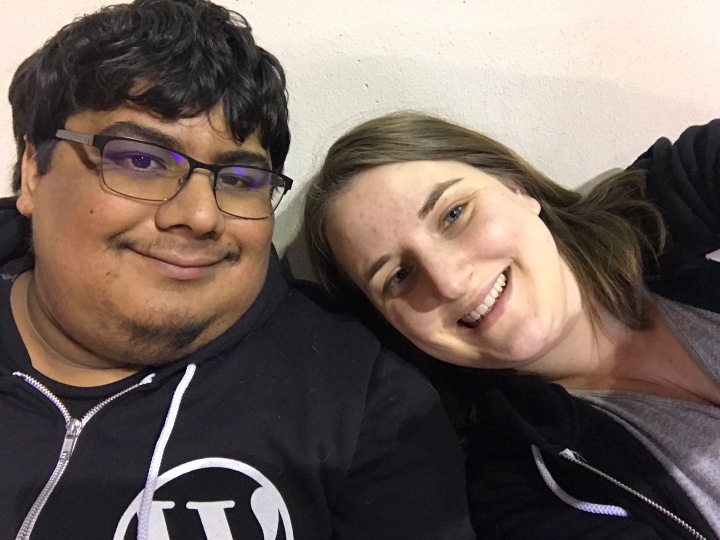 Along with the console, Anthony also preordered The Legend of Zelda™: Breath of the Wild. Although we typically download our Nintendo games exclusively from the eShop, he decided to purchase a physical copy this time around to keep some space cleared up on the MicroSD card we planned on using.

The two separate lines at Best Buy in Plano, TX went quite well – there was one line for those who had pre-ordered and another line for those who had not. Closer to midnight the Blue Shirts began to let the campers in a few at a time. We were about 6th in line? and soon enough we were walking past the tables of other items we could purchase along with the console – games, toys, extra Joycons, and so much more. After about 5 dozen “no thank you’s” we were finally at the pickup counter and almost right away we had the Nintendo Switch and Zelda in hand.

After picking up our items, we were instructed to remain in the store until the clock struck midnight, when Nintendo had approved release of the device. We headed home but not before picking up some food – In N Out burger for me (grilled cheese) and Whataburger for Anthony. As usual I was driving so of course someone just couldn’t keep their mitts off the new hardware…

Thanks to T-Mobile and our bountiful tethering plan, updates were started and the device was setup before we even got home!

Since then, this has been the view from my side of the couch:

In addition to having an over-the-shoulder view at Zelda, we played Snipperclips together for the first time last night! It was great fun, we had a blast clipping each other and pretty funny things occurred during this Snipperclips session.

Yep, my mom commented asking for grandbabies again… no not yet! House first, then babies (maybe next year).

Since heading home from the Nintendo Switch launch, we’ve already picked up 2 more “accessories” that we honestly should have purchased right then and there!

For now I think we’re set on accessories, unless we decide to add a few more Joycons to our pack. I absolutely love the fact that they are rechargeable (even though we already used rechargeable batteries in our Wiimotes).

One thing I will say is that the Joycons are a tad difficult to remove from the wrist straps that slide on. I expect that will resolve over time and with a bit more use, but we’ll keep our eyes on them.

As for upcoming games, we’re looking forward to Mario Kart 8 Deluxe coming out on April 28, 2017 as well as the accompanying new steering wheels! Splatoon 2 is also another game we are keeping our eyes on, the original was loads of fun especially with the online play. We’re interested to see how they tweak it for this new console since the only release date we have so far is “Summer 2017” details of the game are still emerging.

Have any questions about the Nintendo Switch? Leave us a comment, we’ll get back to you.

Already have a Nintendo Switch? Let us know what your thoughts are and what games you’re looking for.

Carissa (31) lives in Richmond, VA with her husband Anthony, daughter Wilhelmina (Willa), and their 4 rescue dogs and 1 rescue cat. She spends her days as a Happiness Engineer for Automattic (WordPress.com), and the rest of her time volunteering, catching up on TV, playing with new tech, or hanging out with her fur babies. View all posts by Carissa F.